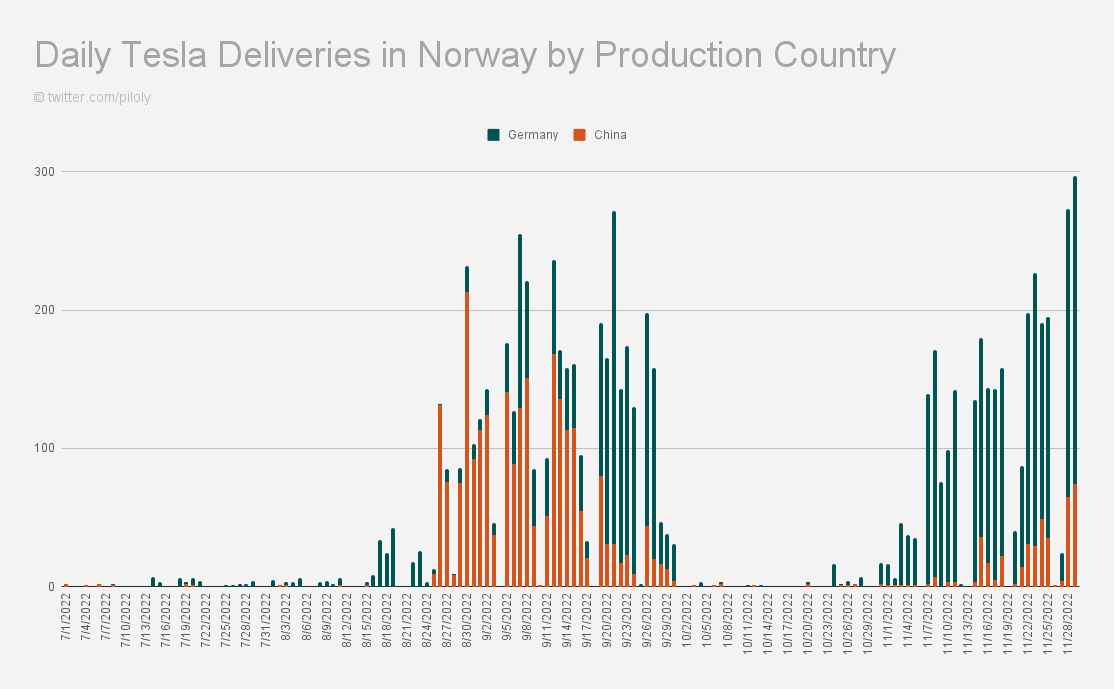 Tesla is continuing to set records and in Norway, which has led the electric vehicle adoption globally, data shows that Tesla is preparing for another record-breaking quarter. Tesla investor Mathias Fens pointed this out and cited data from

Mathias Fens shared on Twitter while citing graphs by Roland Pircher, another Tesla investor. Fens noted that Monday (yesterday) was Tesla’s most significant day in 2022 for Tesla deliveries in Norway.

He added that 223 of those vehicles were made at Giga Berlin, making the tally cross over 6,000 made-in-Berlin Model Ys delivered in Norway this year.

223 of those vehicles where MIG MY’s — putting Giga Berlin above 6,000 Model Ys delivered to 🇳🇴 this year

Pircher shared a short Twitter thread explaining the charts. The first chart analyzed the daily Tesla deliveries in Norway by Production Country; green for Germany and red for China. The chart shows that by date, there were more vehicles made in Germany delivered daily in Q4 than those made in China.

Pircher pointed out that Tesla has set a new year-to-date record of sales and deliveries.

“One month before end of the quarter push,” Pircher said.

In his thread, Pircher tweeted that there are now over 6,000 made-in-Berlin Tesla vehicles sold only in Norway.

“And already after only 2 days of this week, we can guess a new weekly record from Giga Berlin. The highest VIN to date was just over 50 k,” he said.

Pircher pointed out that made-in-China Model 3 vehicles will arrive soon and will lead to even higher records. But for now, almost only the Model Ys have been sold in this quarter, he noted.

Tesla is set for a record breaking Q4 in Norway