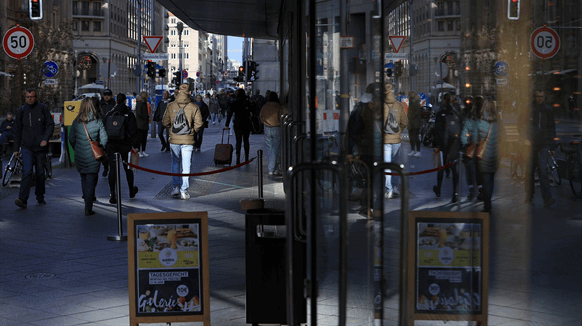 The eurozone faces a grim winter as a recession bites just as double-digit inflation grips the region and war rages nearby, according to the European Commission.

European Union officials in Brussels on Friday slashed their forecast for growth next year, predicting barely any expansion, and raised all their projections for consumer prices. They reckon the economy is now shrinking and will keep contracting during the first quarter.

“Amid elevated uncertainty, high energy price pressures, erosion of households’ purchasing power, a weaker external environment and tighter financing conditions are expected to tip the EU, the euro area and most member states into recession,” the Commission said. “Broadening price pressures are expected to have moved the inflation peak to year-end.”

The projections cast new light on the challenge facing Europe’s governments and central bankers as they navigate an energy-driven cost-of-living shock for consumers at a time when nights are drawing in and temperatures falling.

The economy confronting them is buckling under the crushing weight of inflation that reached a new euro-era high of 10.7% in October. The Commission reckons price growth will now average 8.5% this year and 6.1% in 2023 — both markedly higher predictions than made in July.

The 2022 projection for economic expansion is 3.2%, raised only because of stronger-than-expected performance so far. For the coming year however, the Commission sees growth of just 0.3%, down from a prior forecast of 1.4%.

Germany, the region’s biggest economy, will shrink more than any other euro-zone member in 2023, the forecasts show. In the wider EU, the only other country seen suffering as badly is Sweden.

Out of 15 euro-zone countries on which the Commission provided a quarterly forecast for gross domestic product, every one of them is seen suffering at least one three-month period of contraction.

“The EU economy is at a turning point” and the outlook “has weakened significantly,” Economy Commissioner Paolo Gentiloni told reporters in Brussels. “Inflation has continued to rise faster than expected, but we believe that the peak is near.”

The Commission cautioned that plenty can go awry again in 2023.

“The economic outlook remains surrounded by an exceptional degree of uncertainty as Russia’s war of aggression against Ukraine continues and the potential for further economic disruptions is far from exhausted,” officials said. “The largest threat comes from adverse developments on the gas market and the risk of shortages, especially in the winter of 2023-24.”

Addressing the policy outlook, ECB Executive Board member Isabel Schnabel said on Thursday that borrowing costs will need to rise to a level that puts a brake on the economy. She also addressed the threat of a contraction.

“It’s clear that the risk of a recession has gone up, given the data that we’ve seen,” Schnabel said. “We will need to raise rates further, probably into restrictive territory, to bring inflation back to our medium-term inflation target in a timely manner.”