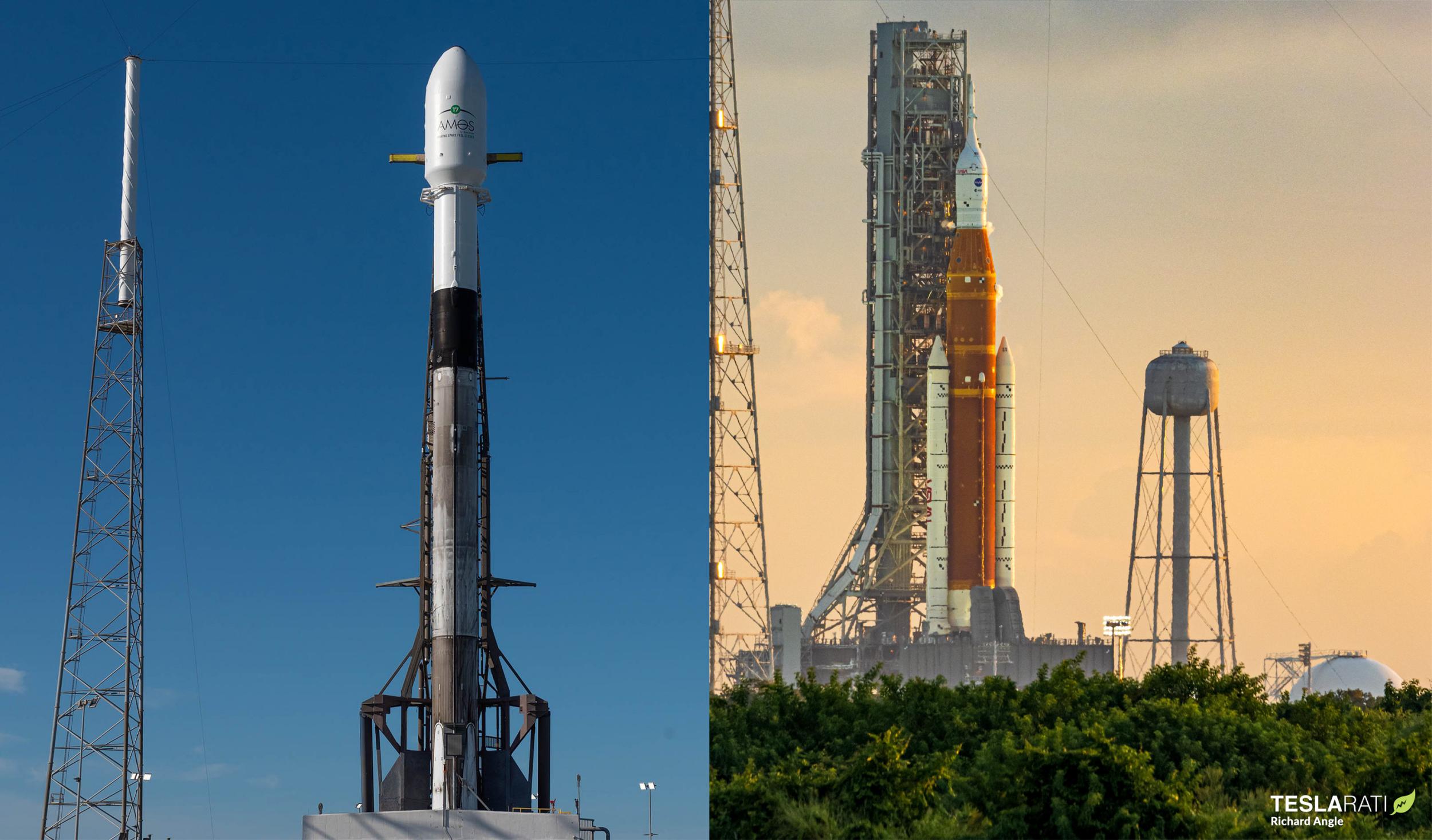 SpaceX, NASA, and the rest of the Kennedy Space Center (KSC) and Cape Canaveral Space Force Station (CCSFS) are doing what they can to prepare for Tropical Storm Nicole’s imminent arrival.

The somewhat unexpected storm grew quickly in recent days and has become a system that could at least partially threaten the Space Coast and its tenants. After the likelihood of favorable weather conditions dropped to just 20% on November 7th, SpaceX announced later the same day that it would delay its next Falcon 9 launch from November 8th to no earlier than (NET) November 12th. Increasingly tight scheduling of one of SpaceX’s two Florida pads will likely trigger delays for at least two or three more November launches, magnifying the storm’s immediate impact.

In comparison, the situation facing NASA could become more serious. On November 4th, for the fourth time since April 2022, NASA rolled its first Space Launch System (SLS) rocket to KSC’s LC-39B pad for a third launch attempt. Due to a combination of the storm’s quick growth and the nature of the SLS rocket, the design of which was dictated more by political expediency than rational engineering, the agency was reluctant to roll the rocket back to shelter. By the time it was clear that Nicole would impact Cape Canaveral, it was too late for NASA to complete the multi-day rollback process.

In late September, Hurricane Ian created a similar situation. The threat of the tail-end of the storm bringing winds higher than the SLS rocket is rated to survive forced NASA to abandon a third launch attempt and instead roll SLS back to the Vehicle Assembly Building (VAB), which is rated to survive even a Category 5 hurricane. According to NASA, SLS is designed to withstand wind gusts as high as 137 km/h (85 mph). Even then, some senior officials were brazenly reluctant to stand down. Every round trip to and from the VAB guarantees weeks of delays before the next possible launch attempt. Additionally, while NASA has refused to offer more context, each crawler ride seemingly takes a toll on the SLS rocket, meaning that the vehicle can only handle a limited number of rollbacks before unspecified issues begin to arise.

As a result, even though high winds could apparently damage the first SLS rocket and orbit-capable Orion spacecraft, which represent 10-15 years of work and would cost a minimum of $4.1 billion to replace, NASA was nearly willing to play chicken with a hurricane. Ultimately, someone in the agency saw reason and took the threat seriously enough to return the rocket to the safety of the VAB. But just six weeks later, with no evidence that NASA seriously considered a rollback before it was too late, SLS is stuck at Pad 39B while an increasingly threatening tropical storm – verging on a Category 1 hurricane – approaches the Space Coast.

Because the rollback process (which takes about a day) requires days of preparation, NASA would have had to decide to return SLS to the VAB days in advance. Instead, even though NASA was already aware that a storm system was developing, the agency decided to roll the rocket out of the VAB to LC-39B late on November 3rd. Had NASA merely delayed rollout by a few days to allow forecasts of the storm system to become more confident, it’s unlikely that it would have moved forward with its rollout plans as the storm’s predicted impact worsened.

When Hurricane Ian threatened KSC, NASA decided to roll SLS back to the VAB after the odds of sustained hurricane-force winds grew to 6%. That makes NASA’s decision to roll SLS to the pad when it had a forecast showing a 4% chance of similar winds even stranger.

SLS will be forced to weather the storm while sitting unprotected at the launch pad. As of November 7th, NOAA models predicted a 7% chance of hurricane-force winds at Kennedy Space Center. The odds increased to 15% 12 hours later – briefly equivalent to Russian roulette. The latest forecast has dropped to a 10% chance of sustained wind speeds of 120 km/h (75 mph) or higher. It’s unclear what the SLS rocket’s tolerance for sustained winds is, but it’s likely lower than its tolerance for gusts of up to 85 mph.

With any luck, Nicole will fall on the right side of NASA’s gamble. In the meantime, to “provide sufficient logistical time to get back into launch status following the storm,” NASA has delayed its third SLS launch attempt from November 14th to November 16th. The bulk of Nicole’s impact will begin to be felt at KSC as early as November 9th and should last for several days.

SpaceX, NASA batten down the hatches as another storm approaches Florida

Eni And BF To Develop Agro-Industrial Supply Chain For Energy Use
Elon Musk on reports of Antifa wanting to burn down Tesla: “concerning.”
‘Heated’ and ‘really ugly’: Europe fails to thrash out details on gas price cap as talks turn sour
Renault wants to use water from depths of 4,000 meters to supply heat to an old production plant
After decades as a nuclear powerhouse, France makes its play in offshore wind