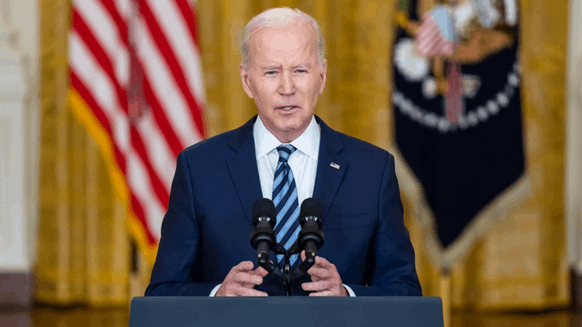 Hours after Senator Joe Manchin delivered a fatal blow to climate change legislation championed by Joe Biden, White House officials began making plans for the president to take matters into his own hands.

They wanted to act fast. Heading into the weekend, news of historic heat waves scorching cities from Phoenix to London seemed to underscore the urgency of the climate threat. And they had the perfect stage to announce bold action: In a few days, Biden would deliver a speech on clean energy in front of a shuttered Massachusetts coal plant.

His aides worked feverishly on a plan to show he was aggressively, and unilaterally, attacking climate change. They drafted a menu of options, including an emergency proclamation that would unlock sweeping executive powers allowing Biden to potentially block crude exports, fund clean energy construction and curtail offshore oil drilling.

Then, before the speech, Biden himself hit pause. There would be no emergency proclamation — not yet. He sent the aides back to the drawing board, where they remain, trying to chart an ambitious path forward that will not only pass legal muster but yield measurable results for voters, all while delicately handling Senate politics.

The new campaign will unfold over the next few weeks, with policy initiatives likely touching manufacturing, transportation and other sectors. An emergency proclamation is still likely. But the frenzied effort to get there — recounted by multiple people familiar with the deliberations — suggests that the White House is struggling to work around the narrowly divided Congress, even as it seeks to move independently.

While the administration spent months amassing a suite of possible policies to deploy in case congressional talks collapsed, those were far from ready.

After Manchin’s move, aides began drafting an order that would trigger immediate interventions and honed ideas for actions the president and federal agencies could swiftly take. Some agency officials were enlisted to help build out the policy plans, people familiar with the matter said.

By late Monday, some officials were preparing for a possible midweek climate emergency declaration, though no decision had been made, two people familiar with the matter said.

By midday Tuesday, the strategy had shifted.

Biden had pressed aides to move rapidly — putting actions on the table that could be delivered in short order. But he stressed that the plans needed to be fully fleshed out and made as robust as possible. On Wednesday, Biden acknowledged that tension. “I’m running the traps on the totality of the authority I have,” he told reporters.

There were political considerations, too, although they weren’t deciding factors in postponing an emergency declaration, people familiar said.

There were discussions, for example, about the timing of a climate proclamation — which could upset work in Congress on health care legislation, people familiar said. Senate dynamics were a part of the calculus, said one administration official who asked not to be named describing the deliberations. Despite Manchin’s withdrawal of support for the climate package, the White House does not want to alienate him — a moderate Democrat from coal- and gas-rich West Virginia whose vote is critical to pass key legislation in the Senate.

At the same time, the menu of possible policy announcements for Biden’s speech was also being narrowed down. Roughly a half dozen iterations of the portfolio were considered between Sunday and Tuesday evening as aides tried to balance what was immediately actionable with the risks of appearing to be doing too little, people familiar said.