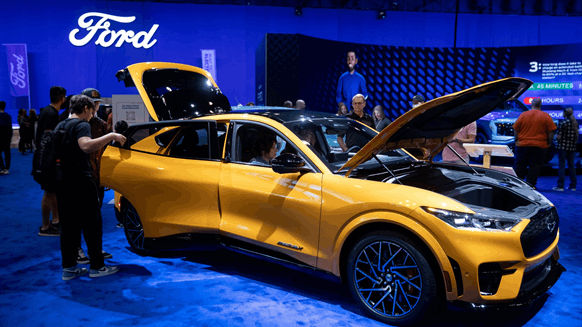 With gasoline prices in America topping $5 a gallon for the first time, the one vehicle that can alleviate pain at the pump — an electric car — is experiencing its own bout of runaway inflation.

Automakers pressed by consumer demand and rising material costs are charging more for electric vehicles across the board. Market leader Tesla Inc. is boosting sticker prices by as much as $6,000 a car, its third increase this year, Electrek reported. Ford Motor Co. has raised the price of its Mustang Mach-E, following a similar move by electric-truck startup Rivian Automotive Inc.

And yet the buyers still keep coming.

“We’ve seen an actual acceleration in demand” at Rivian since the boost on March 1, Chief Financial Officer Claire McDonough said at a Deutsche Bank conference Thursday. “We had 10,000 new pre-orders with a $93,000” average selling price.

The average price of an EV reached $60,984 last month, well above the $46,634 mark for the overall market, according to automotive researcher Edmunds.com. That average excludes Tesla, which doesn’t share pricing data with research firms, but Electrek reported that the popular Model Y long-range model now starts at $65,990, up from $62,990.

“There is growing interest in EVs because of the gas shock, which has been going on for months and shows no signs of abating,” Jessica Caldwell, Edmund’s executive director of insights, said in an interview. “Along with growing demand, there is very limited supply. And if anyone is going to absorb these costs, it’s probably someone looking at an EV, who generally has a higher income.”

Rivian’s McDonough isn’t the only auto executive saying that EV buyers continue to accept higher prices, even as the broader auto market is starting to push back on inflationary sticker prices.

“If there’s one area where I do think we have some capability to price left, it’s on our electric vehicles,” John Lawler, Ford’s chief financial officer, said Wednesday at the Deutsche Bank Global Automotive Conference. “So far, the pricing is sticking.”

Beyond demand, automakers are boosting EV prices because of runaway raw-material costs, which Ford sees as a $4 billion headwind for the company this year. Chief Executive Officer Jim Farley recently said it now costs $25,000 more to build a battery powered Mustang Mach-E than a gas-fueled Edge SUV. Lawler said higher costs have wiped out EV profits at Ford.

“It’s not just gratuitous, take-advantage-of-the-market type of price increases,” Caldwell said. “We are seeing commodity costs going up, including the mining costs for everything that goes into an EV.”

Boosting prices is one approach automakers are taking to get EVs back in the black as demand surges. Ford also is re-engineering the Mach-E on the fly to reduce cost and improve margins.

EV price inflation also is being stimulated by the ongoing semiconductor shortage, which has crimped the supply of battery-powered models because they require more chips than traditional cars.

That led Tesla Chief Executive Officer Elon Musk to declare in an internal memo this week that the automaker had endured a “very tough quarter” due to supply constraints, despite delivering a record 310,048 vehicles in the year’s first three months. “We need to rally hard to recover!” he wrote.

That recovery includes asking its buyers to pay more.