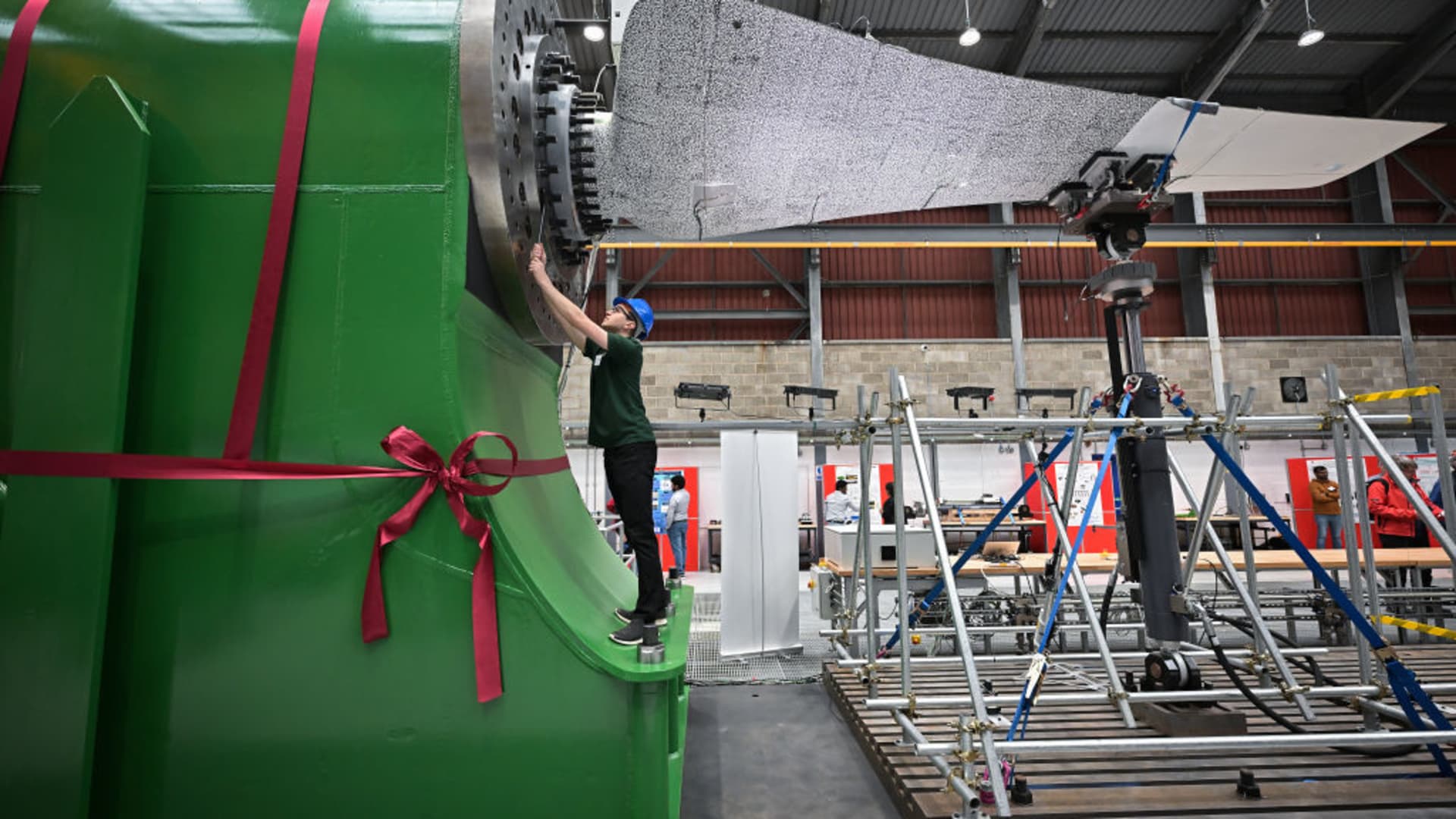 An image of the £4.6 million FastBlade facility. Scotland has a long association with North Sea oil and gas production, but in recent years it’s also become a hub for companies and projects focused on tidal power and marine energy in general.
Jeff J Mitchell | Getty Images News | Getty Images

A £4.6 million ($5.64 million) facility that can test tidal turbine blades under strenuous conditions has been officially opened, with those behind it hoping it will accelerate the development of marine energy technology and lower costs.

In a statement at the end of last week, the University of Edinburgh said the site was the “world’s first rapid testing facility for tidal turbine blades.”

It added that the FastBlade facility would use a 75 metric ton reaction frame that was able to apply “powerful forces on turbine blades more than 50 feet long.”

FastBlade is a partnership between aerospace firm Babcock International and the university that’s backed by a grant of £1.8 million from the U.K. government. The testing center is located in the town of Rosyth.

Tests on blades, the university said, would be undertaken “using a system of powerful hydraulic cylinders, which, in less than three months, can simulate the stresses placed on the structures during two decades at sea.”

Conchúr Ó Brádaigh, who is head of the university’s school of engineering, said FastBlade would be “the world’s first dedicated fatigue test facility for tidal turbine blades.”

He went on to state it would also “help maintain the globally leading position of Scottish tidal turbine developers in the race to find sources of clean and secure power.”

The University of Edinburgh said the FastBlade technology could also be harnessed to test wing components for aircraft and lightweight bridge sections.

Lithium’s vital role in the energy transition sends prices to record highs. How to play it

Scotland has a long association with North Sea oil and gas production, but in recent years it’s also become a hub for companies and projects focused on tidal power and marine energy in general.

These firms include tidal energy firm Nova Innovation and Orbital Marine Power, which is working on what it says is the “most powerful tidal turbine in the world.”

In waters north of the Scottish mainland, the archipelago of Orkney is home to the European Marine Energy Centre, or EMEC, where wave and tidal energy developers can test and assess their tech in the open sea.

European installations of tidal and wave energy capacity jumped in 2021, as the ocean energy sector saw deployments revert to pre-pandemic levels and a substantial increase in investment.

In March, Ocean Energy Europe said 2.2 megawatts of tidal stream capacity was installed in Europe last year, compared to just 260 kilowatts in 2020. For wave energy, 681 kW was installed, which OEE said was a threefold increase.

Globally, 1.38 MW of wave energy came online in 2021, while 3.12 MW of tidal stream capacity was installed. Capacity refers to the maximum amount of electricity installations can produce, not what they’re necessarily generating.

While there is excitement about the potential of marine energy, the footprint of tidal stream and wave projects remains very small compared to other renewables.

In 2021 alone, Europe installed 17.4 gigawatts of wind power capacity, according to figures from industry body WindEurope.