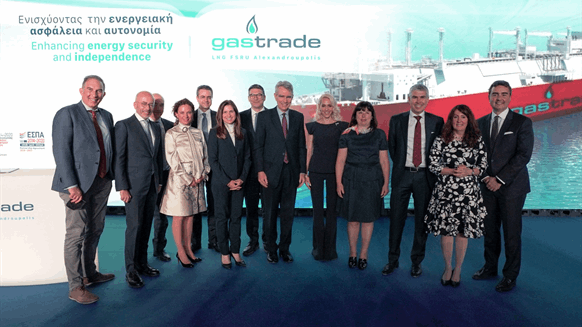 The kickoff for the realization of Gastrade’s LNG FSRU in Alexandroupolis was formally given in a special ceremony that took place in the Alexandroupolis Port Customs on May 3, 2022.

The Prime Minister of Greece Kyriakos Mitsotakis and the Prime Minister of Bulgaria Kiril Petkov co-signed the plaque for the start of the realization of the project, which will become a new energy gateway, playing a key role not only in the energy security and independence of Greece but for entire Southeastern Europe.

The construction and operation of the Alexandroupolis FSRU will strengthen the strategic role of Greece as an energy hub for the wider region of Southeastern Europe and will offer alternative sources and gas supply routes to the region, enhancing energy security of supply and energy autonomy, during challenging times.

The FSRU, with a capacity of 153,500 cubic meters of LNG, will be connected to the National Natural Gas Transmission System of Greece with a 20-mile-long pipeline, through which the gasified LNG will be transmitted to the markets of Greece, Bulgaria, and the wider region with the prospect of supplying Ukraine, as well.

The Alexandroupolis FSRU is expected to operate by the end of 2023, with the contracted regasification capacity reaching already up to 60 percent of its technical capacity of 5.5 bcm per year.

Gastrade has also submitted to the Regulatory Authority for Energy an application for a new Independent Natural Gas System License which will also consist of an FSRU and will be developed near the first FSRU at the Sea of Thrace, offshore Alexandroupolis.

“The energy map is changing. We are now entering the final stage of implementation of the FSRU Alexandroupolis, an important and innovative project for Greece. In a period of high volatility in the geopolitical and energy landscape, with this project, Greece shows Europe that it can respond with firm strategic steps to the uncertainty of the times and, through growth, offer solutions from which everyone can benefit,” Chairwoman of the Board of Directors of Gastrade Elmina Copelouzou said.

“FSRU Alexandroupolis opens a new energy gateway for Greece and Southeastern Europe, which at a critical moment comes to meet an urgent national and European need. From the acratic city of Alexandroupolis that has embraced this project so much, we make Greece an energy reference point in the region, contributing to energy security and the diversification of supply sources, with benefits for millions of citizens in many different countries,” she added.

“The strategic and economic necessity, but also the importance of the project of the LNG Station of Alexandroupolis is more than obvious in the new energy landscape. With this very important project that has brought together the countries living in this neighborhood of Europe, promoting cooperation, solidarity, and ultimately peace in the region, we are strengthening regional energy security, energy liquidity, security, and the well-being of citizens throughout the region of SE Europe,” VP and CEO of Gastrade Konstantinos Sifnaios stated.

“Alexandroupolis is the gateway and Bulgaria is the connecting link of the supply chain that this project comes to supply, on the way to Serbia and Romania. The second FSRU allows for the further extension of this chain to Moldova and Ukraine,” Sifnaios claimed.

“Τhe tragedy currently unfolding in Ukraine has highlighted the importance of LNG not just as fuel that will enable the transition to a lower emissions world, but also as a critical element of many countries’ energy security plans. Such security is only delivered by a substantial investment in infrastructure, which nowadays comes at a cost and a delivery time that, in comparison, shows the foresight of the Gastrade founders that had been planning for this investment well in advance. GasLog […] will deliver the physical FSRU at Alexandroupolis anchorage by the end of 2023,” CEO of Gaslog Cyprus Investments Paolo Enoizi concluded.