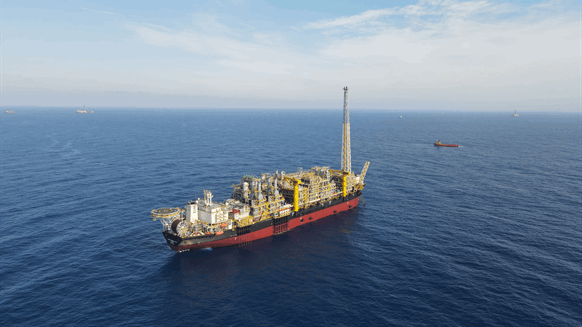 Petrobras started producing oil and natural gas through the FPSO Guanabara on April 30, the first definitive production system installed in the Mero field, in the pre-salt layer of the Santos Basin offshore Brazil.

The FPSO can process up to 180,000 barrels of oil and over 420 million cubic feet of gas, which represents 6 percent of the production operated by Petrobras, contributing to the expected growth of the company’s production. Mero is the Brazilian oil giant’s third-largest pre-salt oil field behind Búzios and Tupi.

The platform arrived at the Mero field at the end of January 2022. During this period, it was connected to subsea wells and equipment and underwent final tests before starting production. In the first wave, 6 producing wells and 7 injectors will be connected to the FPSO. The platform is expected to reach peak production by the end of 2022.

“The FPSO Guanabara is the most complex oil production unit operating in Brazil. The implementation of a project with this technology is the result of more than a decade of learning in the pre-salt layer and of the integrated action between Petrobras, partners, and suppliers. The project was designed to combine production capacity, efficiency, and reduction of greenhouse gas emissions”, highlights João Henrique Rittershaussen, director of Production Development at Petrobras.

Built and operated by Modec, the unit is located some 100 miles off the coast of the state of Rio de Janeiro in a water depth that reaches 6,330 feet. In total, three more definitive platforms are scheduled to come into operation in the Mero field under Petrobras’ Strategic Plan 2022-2026.

The FPSO Guanabara has gas reinjection systems, where the production of gas with a content of 45 percent of carbon dioxide will be all reinjected into the deposit to maintain pressure and improve the recovery of oil as well as reduce the release of CO2 into the atmosphere. The gas reinjection will be done alternately with water injection.

Additionally, the Mero field is developing an unprecedented technology for the separation of CO2-rich oil from oil on the seabed, for its reinjection from the seabed, reducing the amount of gas that reaches the FPSO, thus increasing the availability of oil FPSO and project efficiency.

According to Petrobras, the Mero 1 project is part of one of the most robust geological CO2 CCUS projects in the world. These initiatives are in line with Petrobras’ commitment to reducing carbon intensity by 32 percent in the Exploration and Production area by 2025.