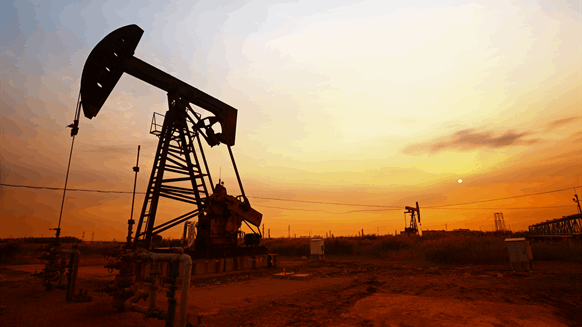 (Bloomberg) — Oil was virtually unchanged as a stronger dollar weighed broadly across commodities, while traders assessed rising fuel stockpiles in the U.S.

The pause follows a fierce run-up at the start of the week, which has seen both crude benchmarks set fresh multi-year highs. The dollar surged by the most in three weeks on Thursday, making commodities priced in the currency less attractive. A spate of strong U.S. economic data has ratcheted up wagers the Federal Reserve may need to move faster on tapering its stimulus operations.

“To have a draw that big on the crude oil side is really constructive for overall crude markets,” said Brian Kessens, a portfolio manager at Tortoise, a firm that manages roughly $8 billion in energy-related assets. However, the refined products build was disappointing and may be due to an increase in refinery utilization ahead of the summer driving season, he said.

Still, optimism is growing around the demand rebound from the U.S. to the U.K. and parts of Asia. As forecasts of a tighter market abound, Saudi Arabia hiked its official selling prices to Asia by more than expected. Even so, the nation’s energy minister reiterated that evidence of higher demand will have to come before supply increases.

For demand, “there’s been a quick response to people getting vaccinated and lockdown restrictions coming off,” said Peter McNally, global head for industrials, materials and energy at Third Bridge. “There’s plenty of upside in gasoline consumption, and jet fuel demand is coming back. Even if international travel is slower to return, that’s not going to derail” the recovery.

Early signs that the U.S. is experiencing an uptick in demand heading into the summer are starting to be confirmed by U.S. government data. The four-week rolling average of gasoline supplied — which is used as a proxy of demand for the fuel — gained for a third week in a row at its highest since March 2020, Energy Information Administration data showed. The same gauge for jet fuel demand is also on its third consecutive week of gaining.

“Even ahead of the Memorial Day holiday weekend, U.S. gasoline demand was posting strong numbers,” JPMorgan Chase & Co. analysts including Natasha Kaneva said in a report. Meanwhile, “global mobility continues to recover with Europe surging ahead and India finally turning a corner.”

Despite crude’s rally, holdings of ICE Brent futures contracts have fallen sharply in recent weeks. Total open interest on the global benchmark is near its lowest since December, and was overtaken by Nymex WTI for the first time since 2018 in recent days.

Meanwhile, even with signs a resolution to Iran nuclear talks may still be months away, the market continues to watch for developments that could lift sanctions on the Persian Gulf country’s crude exports. Returning Iranian output has “big” potential to turn a supply deficit in the market into a surplus, Leonid Fedun, vice president for strategic development at Russia’s Lukoil PJSC, said at a forum.

Miami’s mayor looks to woo Chinese bitcoin miners with low energy prices and clean nuclear power
Renewables = 21.6% of US Electricity in 1st Quarter, 25.5% in March
Siemens Gamesa to supply ‘typhoon-proof turbines’ for major Japanese wind project
Oil Futures Mixed Amid Declines in Broader Markets
China is kicking out all its bitcoin miners – and a lot of them could be headed to Texas