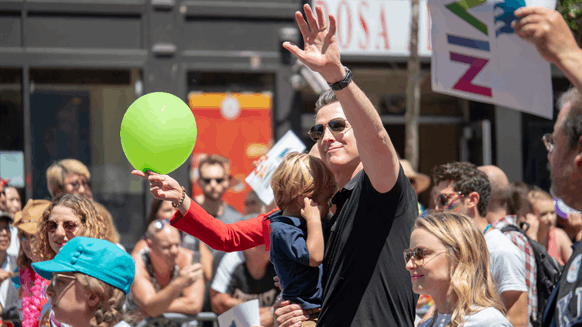 His order Friday to halt new permits by January 2024 follows calls from environmental groups for executive action after two Democratic state senators failed to pass legislation that would prohibit fracking altogether in 2023. The bill aimed to protect communities that are most impacted by the oil production technique, which involves blasting a mix of water, sand and chemicals underground to unleash oil from shale rock.

California has shuttered a massive amount of natural gas-fired power generation in recent years, and in September Newsom announced a ban on sales of new gasoline-powered cars starting in 2035. The fracking ban is less consequential for the broader fossil fuel industry because the practice accounts for only a fraction of the state’s crude output.

Los Angeles-based oil driller California Resources Corp. slumped as much as 8.8% after the announcement.

“It’s historic and globally significant that Gov. Newsom has committed California to phase out fossil fuel production and ban fracking,” Kassie Siegel, director of the Center for Biological Diversity’s Climate Law Institute, said in a statement. “Californians living next to these dirty and dangerous drilling operations need protection from oil industry pollution today.”

California’s oil production has declined steadily since 1985 and currently represents less than 4% of the nation’s output, according to the U.S. Energy Information Administration. Widely employed from Texas to North Dakota, fracking has turned the U.S. into the world’s largest crude producer.

Some environmental activists are urging California to do more, faster. Billionaire Tom Steyer joined academics in calling for the state to end net greenhouse-gas emissions by 2030. In a recent report, they argued that the state has the means to pull more carbon from the atmosphere than it emits and needs to radically accelerate its climate change plans, often considered among the country’s most ambitious.

A report from three state agencies found that California will need to triple the pace of wind and solar installations if it hopes to eliminate emissions from its electricity grid by 2045.