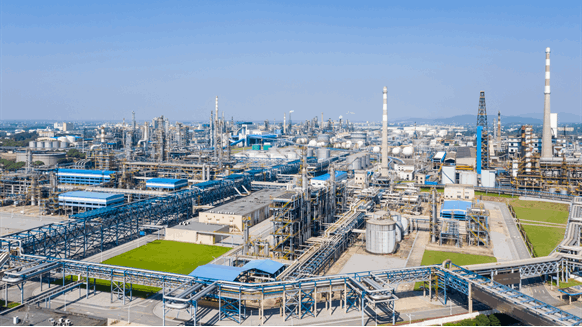 (Bloomberg) — The fallout from the Arctic blast that took out some of the biggest American refineries is being felt across the Pacific Ocean in Asia, where plastics makers are facing surging prices for key feedstocks.

The U.S. is a major supplier of naphtha and propane — which are turned into petrochemicals used to make everything from medical masks to car interiors — to Asia. While American refineries are slowly restarting, it looks set to be a messy process that could take several weeks.

Naphtha in Japan is up around 7% since Feb. 11 and was at the widest backwardation, a market structure indicating tight supply, in a year this week. Prices for propane, a type of liquefied petroleum gas, for late-March and early-April delivery to Asia are fetching premiums of $28 to $45 a ton over the regional benchmark, traders said, from as low as $3 for end-February delivery.

The big freeze’s impact is rippling through energy supply chains in different ways. Asian plastics makers — including Formosa Petrochemical Corp., LG Chem Ltd. and Lotte Chemicals Corp. — are facing higher costs, but the region’s producers of fuels such as gasoline are benefiting from the refinery shutdowns.

Asia needs about 2.5 million tons of naphtha from the U.S. and Europe in both March and April, according to Armaan Ashraf, an analyst at FGE. However, the U.S. is forecast to send just 910,000 tons to the region this month, according to estimates from Vortexa, down from 1.2 million tons in January.

“The U.S. is pulling more than usual volumes of oil products from Europe,” Ashraf said. “So there’s a chain reaction across the board.”

A similar trend is happening with propane. U.S. LPG exports to Asia are just under 1.1 million tons so far in February, according to Vortexa, down from 2.6 million tons in January. Around 11 LPG tankers are in the Houston Ship Channel to pick up cargoes, while 27 are waiting to get in, ship-tracking data show.

“The cold weather meant propane demand in the U.S. has been very strong for February, running down inventories, and leaving fewer barrels available to export to Asia and Europe,” said Ciaran Tyler, an analyst at Energy Aspects Ltd.

Formosa Petrochemical bought naphtha for April delivery at a $14 to $16 per ton premium to Japanese benchmark prices on Thursday, according to traders who asked not to be identified. That compares with a premium of $11 to $12 for cargoes for March delivery.

Prices may ease once the LPG backlog starts getting cleared in April, but stronger-than-usual demand due to the cold weather may keep benchmark prices firm, the traders said.

That will in turn result in higher demand and prices for naphtha, FGE’s Ashraf said. There will also be much more incentive to blend the light ends fuel into the gasoline pool in the U.S. as prices have soared, he said.

Upcoming refinery maintenance could also be supportive. Energy Aspects currently estimates there will be 3.2 million barrels a day of crude distillation and condensate splitting capacity offline in Asia in April. That’s higher than the five-year average of 2.94 million barrels a day, Tyler said.