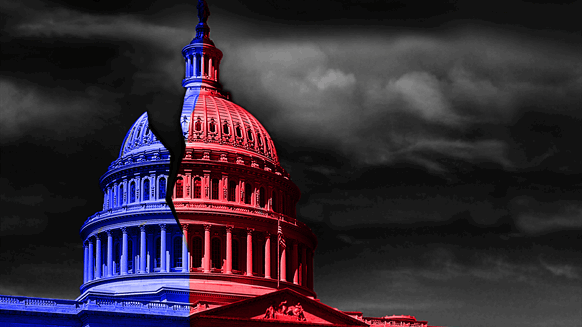 (Bloomberg) — The Senate cleared a key hurdle toward passing President Joe Biden’s stimulus plan after 15 hours and 41 roll call votes on amendments that will ultimately have little bearing on the final legislation but could signal problems for the new administration.

Seven Democrats, for example, voted with Republicans to oppose any ban on fracking. And two voted in favor of the Keystone XL oil pipeline weeks after Biden revoked its presidential permit — potential warning signs as Democrats prepare a package on climate change legislation.

On other items, such as keeping the U.S. embassy in Jerusalem, the votes revealed widespread, bipartisan support. On the question of who should receive stimulus checks, the lawmakers widely agreed that they shouldn’t go to the rich — but didn’t resolve where to draw the line.

While the non-binding amendments have no official influence on how lawmakers write the bills, they underscored division among Democrats in the chamber they now control with a 50-50 party split that gives them no votes to spare.

Here are the key takeaways from the Senate all-nighter.

Senators agreed they they didn’t want stimulus payments to go to “upper-income” households, but they didn’t define that nebulous term. The chamber on a 99-1 vote passed an amendment that would seek to target the payments but how to do that will continue to be a source of debate between the two parties. Republicans have proposed to phase out $1,000 payments completely for singles making $50,000 or more, and couples making $100,000 or more. Democrats are looking to give $1,400 payments to households making up to the $50,000 and $100,000 thresholds, with phaseouts above those levels. However, some top Democrats including Senate Budget Committee Chairman Bernie Sanders and Senate Finance Committee Chairman Ron Wyden, say they want to keep the $75,000 threshold for singles and $150,000 for couples used for previous stimulus rounds.

The Senate voted to approve a measure that would seek to bar undocumented workers from receiving stimulus checks. That amendment was stripped out in the final budget resolution passed with a tie-breaking vote cast by Vice President Kamala Harris, a move that could set up Democrats for criticism from Republicans that they’re trying to send cash to people not authorized to be in the country. Previous rounds of stimulus checks didn’t go to undocumented individuals, but Democrats have pushed to make sure U.S. citizens whose spouses are undocumented do get their money. The Congressional Hispanic Caucus has pushed for all residents, regardless of immigration status, to qualify for the payments.

The Senate voted to block a fracking ban, underscoring the difficulty Democrats will have pushing ambitious climate legislation through the chamber. Senate Majority Leader Chuck Schumer has vowed to make climate legislation one of the chamber’s top priorities and has said he would “compel the Senate forcefully, relentlessly and urgently to address” the issue as Biden seeks to make good on plans to rid the electricity sector of carbon emissions by 2035 and make the entire economy carbon neutral by 2050. Seven Democrats joined with the chamber’s Republicans to support the measure, but it was one of the amendments stripped out before the final resolution was adopted by the chamber. Although Biden has said he does not support a nationwide ban on fracking, the votes reflect Democratic support for oil and gas development and illustrate the political obstacles to aggressive climate legislation that curbs fossil fuels.

Schumer also stripped out an amendment backing the Keystone XL pipeline, putting some moderate Democrats at odds with the White House. The Senate adopted the measure with the support of all Republicans and two Democrats — Joe Manchin of West Virginia and Jon Tester of Montana. The vote was effectively a rebuke of Biden’s Jan. 20 decision to yank a permit for the TC Energy Corp. project. The Senate blocked a measure that would oppose a carbon tax on a 50-50 party-line vote. The votes indicate high political hurdles to a clean energy standard mandating the use of renewable energy, said Kevin Book, managing director of research firm ClearView Energy Partners. To pass more ambitious climate policies, including a tax on carbon, Democrats “would probably need at least two to four more seats” from states that aren’t producing a bevy of coal, oil or gas, Book said.

A vote on future support for the U.S.-Mexico border wall failed to gain traction, but demonstrated the delicate margins in the Senate, particularly on immigration issues. Manchin broke with his party and voted for a Republican amendment that seeks to prohibit the cancellation of barrier construction contracts. Maine Republican Susan Collins voted with the Democrats. Biden signed an executive order halting the construction of Trump’s signature border wall, but Democrats will be hard-pressed to single-handedly pass other immigration changes. That means Biden will need to keep all 50 Democrats on his side, and convince Collins and at least nine other Republicans to move any legislation.

Senator Bernie Sanders was able to dodge what could have been an uncomfortable vote for some Democrats on whether to implement a $15 minimum wage, an issue where the party isn’t totally aligned. A GOP amendment called to bar the implementation of a $15 wage during the pandemic. Sanders said his plan would phase in the higher wage over five years, so it wouldn’t be during the pandemic, and therefore he agreed with the vote. The measure was adopted on a voice vote, rather than a recorded roll call vote, so member weren’t forced to register their position.

The Senate voted on a 97-3 to affirm a decision by former President Donald Trump to keep the U.S. embassy in Israel in Jerusalem. Trump moved the embassy from Tel Aviv in 2017, which prompted criticism from the United Nations.

Struggle Over Taxes Likely to Persist

Senators pledged that they wouldn’t seek to raise taxes on small businesses for the duration of the pandemic, bolstering a promise from Biden that he wouldn’t seek to raise taxes until the economy is stronger. While lawmakers broadly agree to not raise taxes now, the issue is likely to spark a debate between Republicans who largely oppose new taxes and Democrats who say that the wealthy and corporations should pay more. The body also adopted a measure that expresses support for simplifying state tax filing for workers who work in multiple jurisdictions. Tax professionals have said that many taxpayers could find themselves with surprise tax bills and paperwork headaches this year after working in locations outside their normal office during the pandemic.

US Seeks To Stop Oil Reserve Sales To Refill Stockpiles
Parking lots are becoming as important as cars in climate change efforts
Electric vanlife coming? 2024 Mercedes eSprinter impresses in 300 mile range, efficiency tests
Russian oil sanctions are about to kick in. And they could disrupt markets in a big way
Tesla Model 3 prototype spotted ahead of rumored design refresh