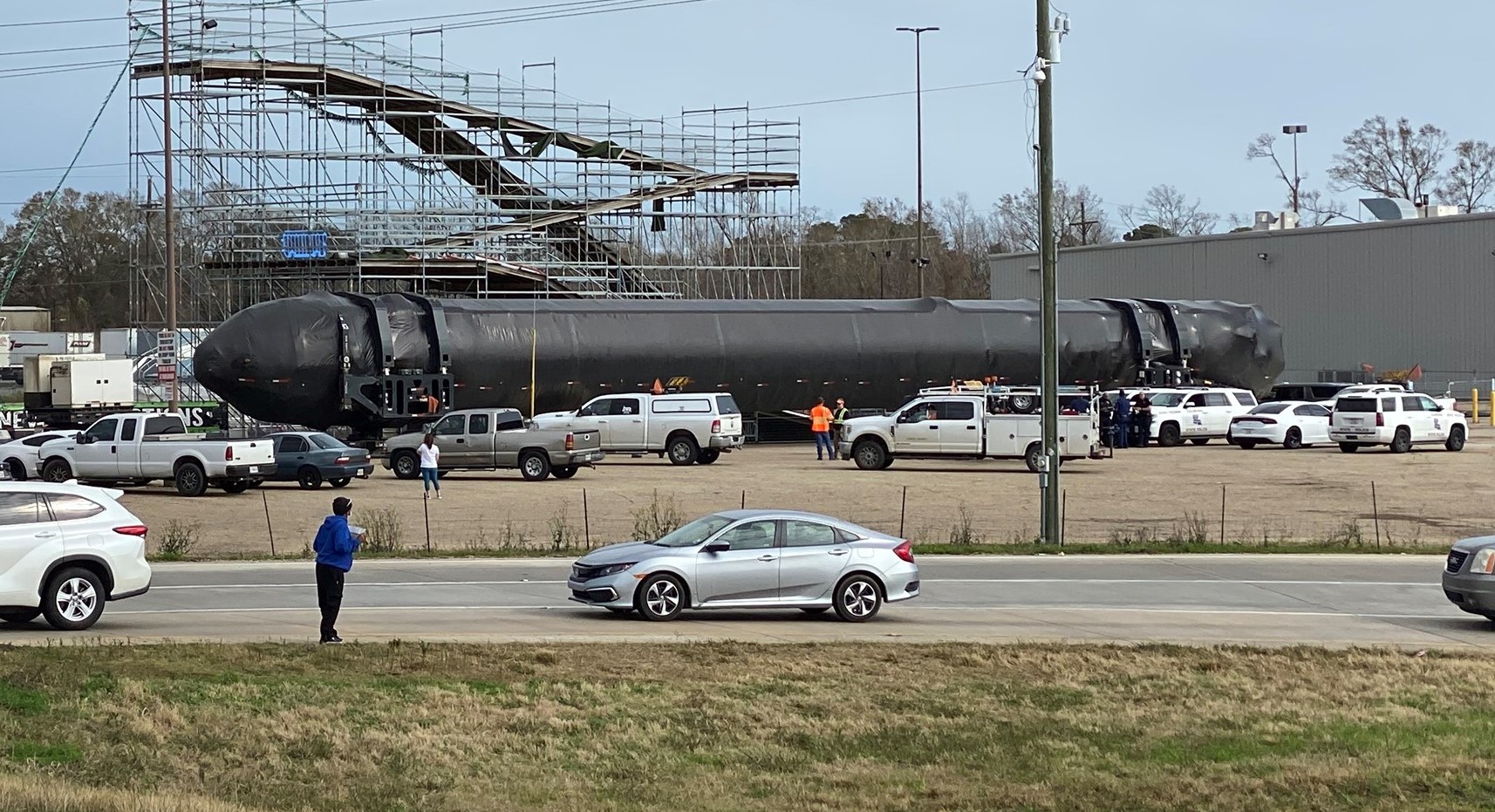 Comprised of five major elements, the vast majority of the challenges of building and launching Falcon Heavy come from the rocket’s three first-stage boosters – each more or less equivalent to a single-core Falcon 9 booster. Falcon Heavy’s twin side boosters are by far the most visually recognizable sign of that similar-but-different nature thanks to the need for aerodynamic nosecones instead of a Falcon booster’s normal interstage (a hollow cylinder).

While easily recognizable, the center core is the most technically Falcon Heavy-specific part of SpaceX’s partially-reusable heavy-lift rocket, requiring a unique airframe relative to side cores, which are essentially Falcon 9 boosters with a few major add-ons. It’s one of those Falcon Heavy side boosters that was spotted traveling by road from SpaceX’s test facilities to a Florida launch pad on Tuesday, January 26th.

For unknown reasons, although SpaceX currently has two reused Falcon Heavy side boosters that flew a second time on the US Air Force’s own STP-2 mission, the company has manufactured all-new boosters – likely at the US military’s request – for the rocket’s fourth launch. Rebadged from AFSPC-44 to USSF-44, that mission will see SpaceX attempt its first-ever direct-to-GEO launch, nominally launching a several-ton mystery satellite directly into geostationary orbit (GEO).

The main challenge of direct-to-GEO launches is the need for a given rocket’s upper stage to coast for hours in orbit and then reignite after that multi-hour coast period. The direct launch profile also demands more delta-V (propellant) than alternative transfer orbits (GTOs) – propellant that must be launched into orbit in addition to the customer’s payload. That requires the use of extremely large and/or efficient rockets, which is why SpaceX is launching USSF-44 with Falcon Heavy instead of a much cheaper and simpler Falcon 9.

Unlike all other direct-to-GEO launches in history, however, Falcon Heavy Flight 4 will (hopefully) mark the first time a rocket launches a payload into geostationary orbit while still recovering a large portion of its first stage. After liftoff, Falcon Heavy side boosters B1064 and B1064 will attempt the first-ever dual drone ship landing at sea, while the rocket’s custom-built center core will be intentionally expended. According to CEO Elon Musk, that sacrificial-center-core configuration theoretically allows Falcon Heavy to achieve ~90% of its expendable performance while still recovering two otherwise reusable boosters.

Ultimately, assuming the second USSF-44 side booster’s static fire acceptance test went well, the only major Falcon Heavy-specific hardware SpaceX needs to ship from its Hawthorne, CA headquarters is center core B1066. An upper stage and payload fairing will also have to pass acceptance testing and head to Florida but both will likely be standard Falcon 9-issue hardware, minimizing small-batch uncertainty.

If SpaceX delivers B1066 to McGregor within the next week or two, the center core should be ready to ship to Florida by March or April, leaving SpaceX two or three months to integrate, static fire, and prepare Falcon Heavy for its fourth launch. According to the latest official information from the US military, USSF-44 is scheduled to launch no earlier than (NET) “late-spring 2021,” likely implying late-May or June.