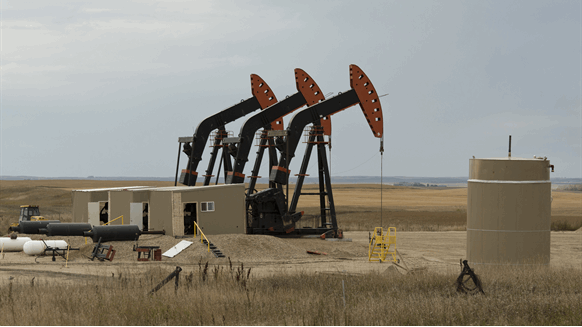 (Bloomberg) — North Dakota, once at the heart of the early shale boom, is now expecting oil production growth to stall over the next two years as explorers reel from a historic market crash and seek to adapt to higher environmental standards.

Home to the Bakken Shale formation, the state won’t see any sustained growth in production sooner than the second half of 2022, Lynn Helms, director of the state’s Department of Mineral Resources, said during a webinar Monday.

After the global pandemic had a devastating impact on oil demand, pushing a slew of U.S explorers into bankruptcy, producers are also under increasing pressure to make improvements on environmental, social and governance issues, or ESG.

“It was a pretty terrible year for the industry,” Helms said. “Producers will be stressed from both ends — the investment end due to ESG and the markets end due to the loss of demand.”

Growth in demand is only expected to resume from late-2021 at the earliest, Helms said. On top of an improvement in consumption, growth in shale depends on investments to replace wells that decline rapidly.

Wall Street has shown no signs of willingness to bankroll another shale boom. Investors had grown wary of the industry’s inability to generate healthy cash flow even before this year’s crash, and a growing number of institutional investors are shunning oil because of climate change concerns.

North Dakota’s shale industry has had to reckon with a history of excessive natural gas flaring from oil wells, with the state introducing limits to control such greenhouse emissions at the expense of production.

This will make it harder for the state to hang on to its current production levels of around 1.2 million barrels a day, after rebounding from a 7-year low in May. The state is expecting output to decline in November and December because of a lack of well completions.

Energy Workforce & Technology Council Gives Out Safety Awards
Qantas Slashes Flights in Australia as Oil Prices Bite
Every new passenger car sold in the world will be electric by 2040, says Exxon Mobil CEO Darren Woods
Quick Charge Podcast: June 28, 2022
How much money do gas tax holidays actually save drivers? What we know, based on 3 states that put temporary suspensions in place