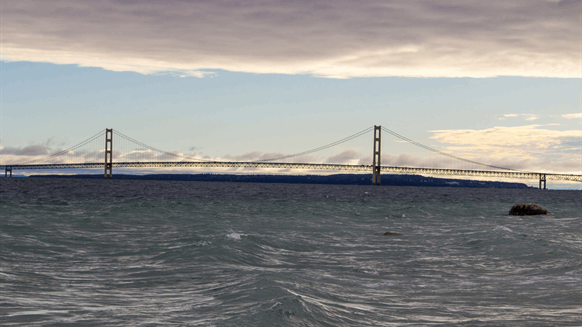 Governor Gretchen Whitmer filed a complaint in Ingham County Circuit Court seeking to “revoke and terminate” a 1953 easement that allows Enbridge to operate under the Straits of Mackinac, which connect Michigan’s upper and lower peninsulas. Line 5 is a key conduit of crude for Canadian refineries in Ontario and Quebec.

“Enbridge’s Line 5 is a grave and unreasonable risk to the state’s residents and natural resources and requires the pipeline to be shut down 180 days from now, on May 12, 2021,” the state said in a release Friday.

Pipelines across the U.S. have been mired in legal challenges as environmental opposition mounts. Energy Transfer LP’s controversial Dakota Access crude line made headlines again this year after a federal judge said it must be shut down and the company appealed the ruling. The future of the Mountain Valley natural gas conduit linking West Virginia and southern Virginia is now uncertain amid lawsuits over endangered species assessments.

Enbridge shares erased earlier gains following news of the latest legal action and were down 1.4% to C$37.44 at 3:20 p.m. in Toronto.

The company has been in a long-running battle over the pipeline with Michigan’s Democratic administration, which views the line as an environmental threat to the Great Lakes. In June, a judge ordered Enbridge to temporarily halt operations of Line 5 amid concern about possible damage.

“This notice and the report from Michigan Department of Natural Resources are a distraction from the fundamental facts,” Vern Yu, an executive vice president at Enbridge, said in an emailed statement. “Line 5 remains safe, as envisioned by the 1953 Easement, and as recently validated by our federal safety regulator.”

A temporary shutdown of both the eastern and western segments of the pipeline in June prompted Imperial Oil Ltd. to warn of possible production cuts at its Sarnia and Nanticoke refineries. The western segment was restarted in July and the eastern one in September.

While Michigan’s governor wants to shut the pipeline, Enbridge is seeking to make the line more secure by building a tunnel under the strait to house the line.

Unlike nearly all other pipeline projects, Michigan’s state government plays an integral role in authorization for Line 5, according to Liz Kirkwood, a long-time opponent of the conduit and executive director of Michigan’s environmental group For Love of Water.

Line 5 carries as much as 540,000 barrels a day of Canadian light crude oil, light synthetic crude, and natural gas liquids from Superior, Wisconsin, to Sarnia, Ontario, where it links to a pipeline that runs as far north as Montreal.