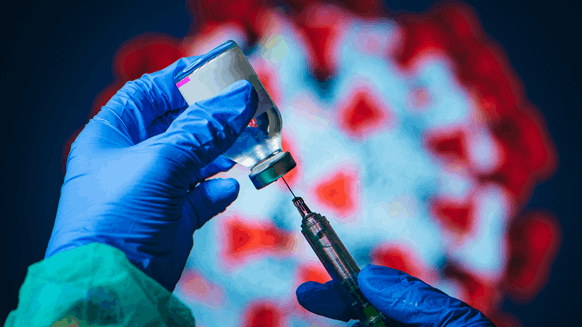 (Bloomberg) — Oil surged by the most since May as news of a potential Covid-19 vaccine breakthrough injected fresh hope that an end is in sight to the worst demand slump in decades.

Futures spiked 8.5% in New York alongside a broader market rally after news that a vaccine being developed by Pfizer Inc. and BioNTech SE prevented more than 90% of symptomatic infections in a large-scale study. While coronavirus cases continue to surge globally, the prospect of a widely distributed vaccine could jumpstart the fragile rebound in consumption.

“This changes everything on the demand side,” said Stewart Glickman, energy equity analyst at CFRA Research. “Assuming it can be produced commercially, it makes it very viable for people to take more risks knowing they have a vaccine.”

While a vaccine would be a big step towards oil’s recovery, the market remains precarious since the pandemic cratered demand, raising the specter of permanent change to the way energy is consumed in some areas of the economy.

Monday’s price jump was magnified by short-sellers who were forced to close their positions in a rush, triggering a buying spree that exaggerated the impact of the vaccine news. The price movement was particularly significant for so-called timespreads, where traders bet on the price of oil at different points on the calendar. In the options market, bets on the WTI curve flipping to backwardation — when nearer-dated contracts trade at a premium to later-dated ones — indicate underlying expectations for improving demand.

“At a minimum, what today’s news has done is put a floor into the oil market, pushing short sellers away,” said Michael Tran, a commodity strategist at RBC Capital Markets LLC. “This is a significant step in the right direction, but there’s still headwinds at play … the duration between now and when demand actually returns is still an open-ended question.”

Energy stocks also rallied in response to the jump in the oil price. The Standard and Poor’s 500 Energy Index surged as much as 16%, the biggest intraday gain since March. Oil refiners Valero Energy Corp. and Hollyfrontier Corp. rose more than 30%.

Still, a vaccine-driven rally for oil prices may come too late to turn around the outlook for some in the refining space, which has struggled in the face of razor-thin margins from anemic demand. The combined refining margin for gasoline and diesel, which is a rough gauge for the profitability of processing a barrel of oil, remains at the lowest seasonally since 2010.

Prices had earlier rallied as Joe Biden declared victory in the U.S. presidential election and began preparations to navigate America’s pandemic-hit economy out of crisis, with potential shifts coming on a range of policies from fiscal stimulus to Iranian sanctions. At the same time, Saudi Arabia said that OPEC+ could extend oil cuts through 2022 as the group seeks to re-balance the glutted market.

A vaccine “would be the most meaningful type of mitigator to the situation,” Saudi Energy Minister Prince Abdulaziz Bin Salman said prior to the Pfizer announcement at a conference on Monday. “We’re still hopeful that vaccine is found and that vaccine or vaccines spread and hopefully mobility would be regained.”