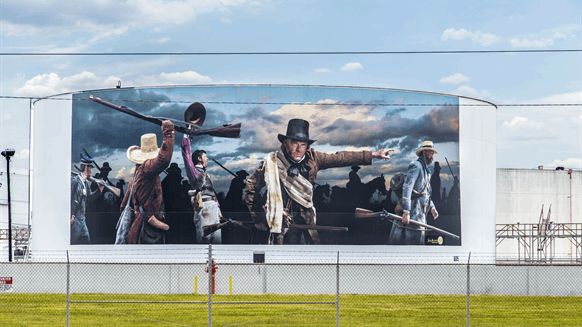 (Bloomberg) — Oil surged by the most in a month, swept up in a broader market rally as a tightly contested U.S. presidential election suggested even a new administration would be restrained from enacting its most ambitious objectives.

Futures advanced 4% in New York on Wednesday after a government report showed crude stockpiles tumbled last week. Alongside oil, major equity indices rallied by the most in months amid optimism that key elements of the bull market will remain intact and President Donald Trump’s 2017 corporate tax cuts will not be rolled back. Currently, Joe Biden has a total of 248 electoral votes to Trump’s 214, with 270 needed to secure a victory.

“Markets are rallying on the idea that, regardless of the outcome of the presidential race, the U.S. is likely to have a split government,” said Tamar Essner, director of energy capital markets at Nasdaq. “It means that anything that’s more of a left-leaning agenda, whether it’s through taxes, regulations or climate policies, will have a harder time getting passed, at least legislatively. That is broadly deemed beneficial for equities, and as an extension, for oil.”

The outcome of the U.S. election will likely have wide-scale implications within the energy sector. A Biden win can stabilize oil prices in the short-term, although his stance on federal fracking permits can impact prices in the longer-term, according to FGE Chairman Fereidun Fesharaki. While Biden’s fracking ban can potentially cut oil output by 300,000 to 500,000 barrels a day, Trump’s sanctions on Iran and Venezuela have more significantly impacted supplies, Fesharaki said.

Meanwhile, a U.S. Democratic sweep had been largely expected to yield a sizable virus aid package that could provide a sorely needed boost to oil demand with the coronavirus raging worldwide and renewed lockdowns in place across Europe.

All the while, the market is still garnering support from growing expectations that OPEC+ producers will delay a planned supply increase in January, muted U.S. production and a weakening dollar. And the forward curve is showing strength as a result. The spread between WTI’s nearest contracts closed at the narrowest contango structure in more than a week.

In the U.S., a government report showed domestic crude supplies tumbled by 8 million barrels last week to the lowest since April, an encouraging sign that comes as the coronavirus pandemic destroys demand for oil. Seven consecutive weeks of declines in domestic diesel stockpiles provided support to the refining margin for ultra-low sulfur diesel, which settled above $10 a barrel for the first time since late August, presenting some hope for refiners who are facing anemic demand.

“Oil prices, at least in the long-term, don’t hinge dramatically on the outcome of the election,” said Essner. “Demand is down because of Covid, U.S. production is being rationalized and the Fed is printing money. That’s pretty much true whether it’s Trump or Biden.”